I write for Kenshi; Kenshi is a non-linear sandbox game. It’s meant to be limitless, unconstraining and completely open. Yet there are rare times when I see comments from the odd dissatisfied player who mentions it having no ending, no finish. Maybe they expect the impossible from an open ended genre; maybe it really does lack something. But as a player who naturally leans towards more narrative-heavy, restricted games with a clear ending, I’m keen to dig a little deeper into other mindsets.

Perhaps there’s something, as a writer, that can be done to add this apparently lacking sense of a satisfying finish. Dialogue and story carry a huge sense of reward to reflect a player’s accomplishments.

A ghost that lingers 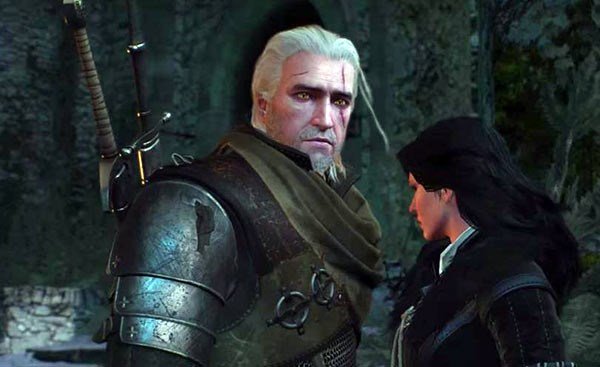 The Witcher 3 is heavily story based, however when the main story ends, the game still goes on. Personally, continuing after this doesn’t appeal to me, it just feels aimless, lonely and empty. This option of continuing just doesn’t feel like it works for the Witcher after being so spoilt by the depth of the main quest. Many people complained exactly this, that it felt lonely and left open; they wanted to talk to all of their favourite main characters, see how Ciri was doing, hook up with Yen etc etc… but all of their favourite NPCs had simply disappeared from the face of the planet.

With open-world games, once I'm done with the main quest line it feels 'completed'. Usually when that's over the world kinda feels like it isn't moving forwards anymore? Like a weird kind of stasis and I'm just wandering around collecting useless random items like a lemon.

It’s hard to sustain the feeling of depth when the main quest is all over.

But you know what? No! Greedy players! The game has to end at some point. But perhaps the option to carry on in an empty world shouldn’t have been offered if these curiosities wouldn’t be satisfied. For many players who are given the option to keep going, they’ll keep going forever and they’ll keep wanting more until you tell them it’s all over.

Players need limits in some way, but we need to be careful not to make that limit too abrupt and sudden. If the game continues on after the main goal, the transition should be seamless and consistent with the rest of the game.

Let’s take a look at Minecraft, a sandbox game that I thought had no ending. But there is. There’s the final boss, the Ender Dragon. After you defeat the Ender Dragon, you’re rewarded with an almost 10 minute long poem spoken between two characters discussing the player’s accomplishments. Credits roll, and then the game continues on.

So the player has had some kind of closing feedback in the form of:

Do NOT underestimate the glorious feeling of kicking back to a random song and watching all those joyous names float down the screen in celebration of your accomplishment. 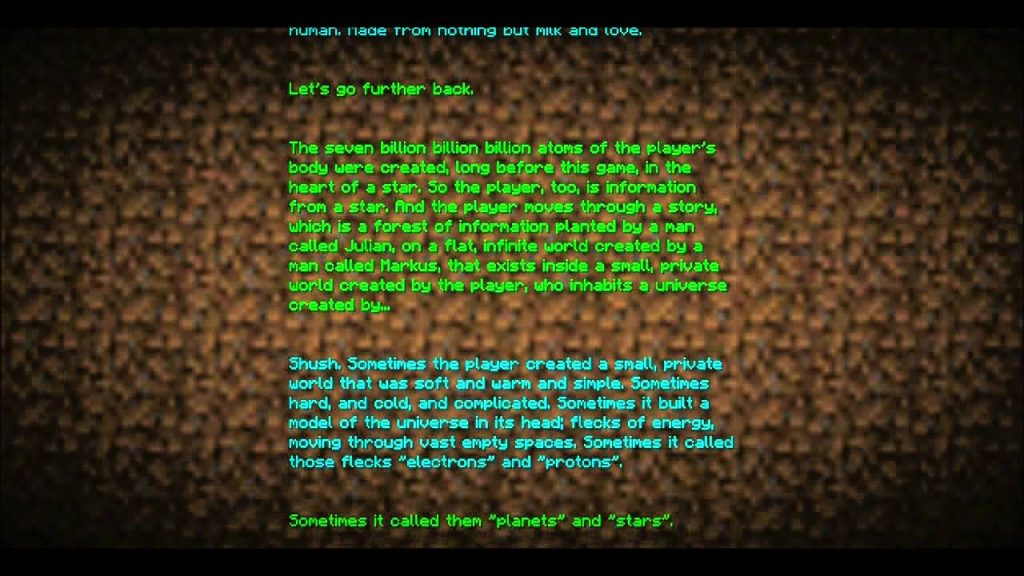 An ending can be subtle, a reward that reflects the impact the player has had on the world. This can be simply hearing stories from NPCs, achieving world renown, reactions toward the player’s cumulative actions, or changes to the world state.

… Or it can simply be the final mark of the end –  rolling credits!

Photo representation of what it end up like! pic.twitter.com/9wro0ID06w

As a completionist by nature, I tend to play in a way where I consider the main boss as ‘the end’ while I tend to all of the side quests first. Side quests in themselves can be a mental prep before the true end.

Recently, I finished watching an absolutely epic TV show called The Korean Odyssey… Okay it’s not for everyone, but I loved it, it’s a total gem, and one thing I noticed during the final episode is that this main character’s backstory is finally revealed to us. And it felt satisfying to finally hear it, told in the style of a short tale to a group of eager children, camp fire style.

They didn’t ram it down our throats in the first episode before we’d even had a chance to warm to the character. Instead, they made us love him and his mysteriousness regardless, and then they treated us to his history right at the end. Take a look at the original Metal Gear Solid: We defeat Sniper Wolf, she chokes us up with her tragic childhood; we defeat the final boss, we get the final bomb dropped on Snake’s cloning. Sure, I’m digressing into a whole other genre now but you get the gist of it – wrap up stories, solve mysteries, spill ALL the beans. 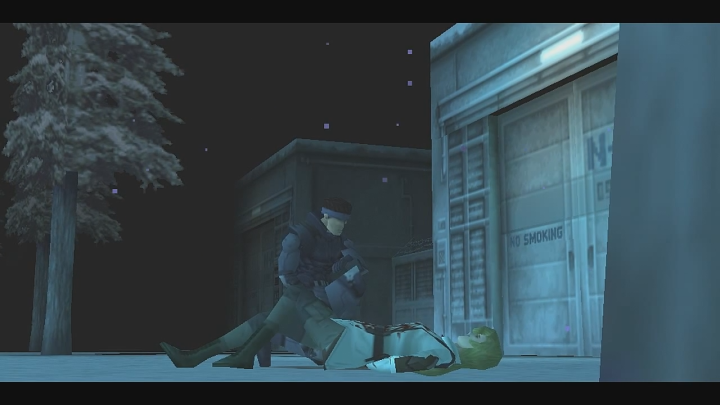 The takeaway? Hold back the juicy backstory and use it as a reward. Have a dying enemy tell the tragic story of ‘why’. Have main characters finally open up to the player with all the information they want to hear. Save the best stuff for the last.

When I feel like even my "challenge runs" aren't interesting anymore, that's when I stop playing

Fable, like the Witcher 3, keeps on rolling after you finish the main story. But it works so brilliantly in Fable, perhaps because you’ve always been a little more alone in Fable than in the Witcher, where Geralt has an array of close companions at hand for dialogue at any time. Nothing really changes in Fable, yet the player can contentedly carry on buying every house in every town, raising a family, or beating a cave full of hobs armed with a frying pan… 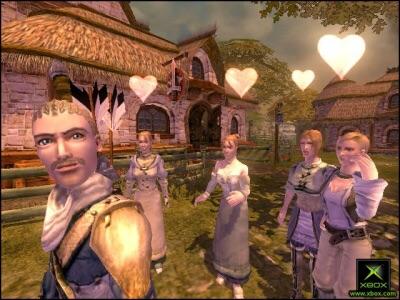 If there is enough in the world to keep the player creating their own goals, the player can play until their heart’s content. But they should be given the chance to follow their main goal with drama and climax, to make some kind of change in the world and then finally see a resolution to their goal.

Create an asshole emperor the player can aspire to overthrow. Create some other asshole they can exact their revenge upon. Create the strongest warrior who’s bloody scalp can be taken as trophy!… Give them something to work toward, to challenge them, to complete, and then leave them with a box full of other self-made goals to fulfill in their new world.

100% achievements. Achievements or it didn't happen…

How can we supermax satisfaction from these self-made goals? With the positive reinforcement of achievements! Now, ya could say achievements are kind of like the equivalent of the developer themselves, peering over your shoulder, confirming for totally 100% super sure that yes, you are in fact half way towards finding those lost diaries. Yes, you have in fact murdered every last templar in the world. You’re doin’ it, buddy.

Feedback makes us feel good. Bathing in the knowledge that we have completed an arbitrary, difficult-to-track, time-consuming goal bolsters the accomplishment that much more. For sandbox games, this can be all the more crucial.

And in the true style of Fable cheekiness, tell them tongue in cheek that there’s nothing more to do, they’ve done everything they can. At the end of the day, it’s important to remember some players won’t ever be satisfied and we simply can’t make infinite content that people will never get bored with. But we can do our best to make sure it doesn’t come to an abrupt and disappointing end. And from what I’ve learned after probing deeper into this… the majority of people really are realistic with expectations, and when enough is enough ¯\_(ツ)_/¯

When I'm satisfied with the time I've spent playing the game. However, the best games for me. I will always come back to. So in some way, they're never really "completed" are they?

Characters Building Creativity dialogue Game Design Game Design Series Indie Game Marketing Inspiration Localisation Marketing Narrative Design PR story World building writing writing for games writing guide
No matter how dark the night, the morning always comes.Lulu, FFX
We use cookies to ensure that we give you the best experience on our website. If you continue to use this site we will assume that you are happy with it.OkPrivacy policy